I suppose since this blog is called "Church Key", I should probably make a post once in a while about a cool bottle opener. 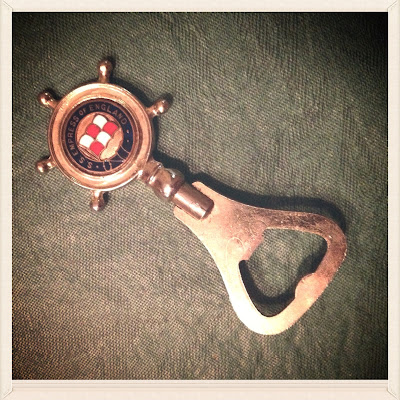 This is a souvenir from The Empress of England. Click the name if you're curious about the ship's history. What you won't find there is the part of its history that says it was the ship that brought me from England to Canada in September of 1967.

A few years ago, I started collecting memorabilia about the ship and this bottle opener was one of the items I bought off eBay, for less than $10 from what I recall. I received a notification from eBay this morning that someone is selling a bottle opener like this one, in worse condition, for ~$30. Among the items I've purchases is one of the original passenger lists from the exact same trip that brought me here, with my family's names are printed in the booklet, and some old newspapers they used to print on board the ship, from the same time period.

Anyway, this isn't about all the stuff I've collected. It's just about this bottle opener. I think it's pretty cool and means a lot to me, although I've never actually opened a bottle with it since I got it.