A friend of the family left a comment on one of my beer pics once that he now has to avoid gluten and is therefore limited to gluten free beers.

I had been meaning to try one to see what they're like.

It just so happens that my wife also picked this one up on the weekend. Nickel Brook's Gluten Free.

I found the aroma to be a little on the floral side. It has a decent head, like the average beer, and the retention is pretty good.

The taste was a little on the bitter side and it had a lingering bitterness that I could probably do without. I also noticed a little gumminess with my saliva after not having a sip for a while. I'm not entirely sure if that's because of the beer or not, but I thought it was worth mentioning. :)

My overall impression was that this been isn't half bad. I have to admit that I'm glad I'm not limited in my choice of beverages due to a gluten allergy or sensitivity. But really, if I was, I think I could feed my beer cravings with this.

One oddity is that this is the first beer can I've seen with nutritional facts printed on it. :) 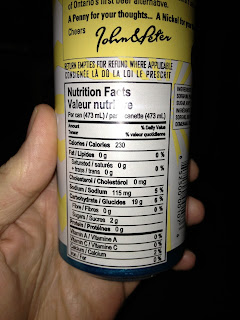