I've been reading up on beer making over the last couple of days. As I do, the experience I had ~20 years ago is coming back to me. I think it's going to be a much different experience this time, since my primary goal isn't just to make cheap beer to drink, but to make a good and interesting beer. I think my first brew is going to be some kind of Belgian White, or Blonde. That may change by the time the day comes.

I'm also more interested in the science behind it than I was back then, which is pretty cool. I told my 17 year-old son that I think he might find that aspect of it to be interesting, so I told him it would be a great father/son project. :) Although he's not of legal drinking age in Ontario (yet) he will be for Quebec by the time I start the project so I'm ok with it. Besides, he doesn't like the taste or the smell of beer. :) 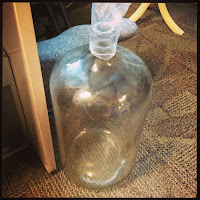 I found most of my beer making kit in the basement yesterday. I'm missing the air lock, hydrometer, and a thermometer. I've seen the air lock kicking around in a box somewhere in the basement, but finding it will be a challenge. I'll probably have to pick up the other two items.

A friend at work has graciously donated a 23L glass carboy to my project in exchange for 6 beers — one from each future batch I make. :) The first (and last) time I made beer, I didn't use a secondary container for fermentation. I'll be interesting to see the beer as it ferments.