This one was on my radar since I first heard of it: Opa's Gose by Beau's All Natural Brewing Company. My wife picked up two bottles for me last weekend. When I asked her why two, she said "In case you like it and it's hard to find."  Can't argue with that logic. 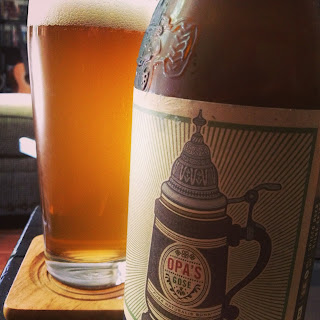 Overall: I wasn't sure if I'd like this or not when I saw the small bag of sea salt attached to the bottle and read the label saying that salt was one of the ingredients.

In the little bag, there's a small leaflet that describes it as follows:


Opa's Gose is a tart beer with mild citrusy notes and a unique salty character. The saltiness of the style is diffused and complemented by a coriander spice

I recall seeing people add salt to their beer to give it head wayyy back in my early drinking years and I tried it once. I like salt, but not so much in my beer.

I was pleasantly surprised. This is a tasty beer. Had I not known that there was salt in it, I'm not sure if I wouldn't have noticed. I chose not to add additional salt though. :)
Posted by Scott at 11:19 PM