All good things must come to an end, and beer festivals are no exception. 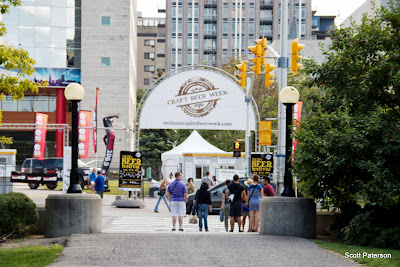 My wife and I hit the National Capital Craft Beer Fest on Friday afternoon, and Saturday evening. After spending a couple of hours there on Friday, I wondered if it was really worth it to get the 2-day pass. If trying as many beer samples is your goal, then the answer is yes. Not just from a standpoint of not wanting to get drunk, but we discovered that some beers aren't available both days. Aside from running out, new ones may appear the next day. More on that in a bit. 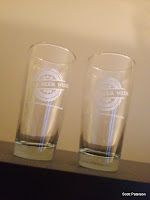 We got out ago of majority and 2-day pass bracelets and then proceeded to the ticket booth to buy our "tokens". Tokens are actually tickets, and they cost $1 each. We bought a sheet of 20 tickets. Side note: kudos for using glass sample glasses and not plastic cups like at Winterbrewed. These will look nice on my glassware shelf! :)

Now, a little gripe. The web site says "Prices for products will vary from exhibitor to exhibitor, but generally beer is priced at a minimum one token per 4 oz serving and 2 tokens per 8 ounce serving." That's a pretty good deal. I mean, you're trying to get people to try your beers so keep the prices reasonable and expand your customer base.

Sadly, this was not the case. There were a few that only charged 1 per 4 oz, but on average it was 2 for a 4 oz, 4 for an 8 oz. That's a pretty pricey beer for something you may not like.  However, some had deals where you could get 8 oz for 3 tokens so it took a little of the sting away.

Anyway, onto the beer tasting. My wife and I tried 20 beers. A few we had tried before, but we wanted a drink to go along with our lunch that we bought there. Although all were great, any with an * were some of our favs.

Beyond the Pale Brewing Company - http://beyondthepale.ca/

The most memorable beers were:
Food! We grabbed a sausage and a poutine with beer gravy from Spuds on Friday afternoon. The gravy was amazing. The sausage was delicious. I think it was one of the cheaper food vendors there too.

We were there for the two guest speakers on Friday, but to be honest we didn't pay much attention to everything they had to say because we were too distracted walking around tasting beers. :) They were Mirella Amato (beer specialist and Canada's female Certified Cicerone) and Ian Coutts (author of Brew North) I'm like a kid in a candy story. Perhaps next year I'll take more time to sit and listen.

We did catch some of the entertainment on Saturday night by the New Country Rehab. They're a country, rock, bluegrass, jazz band from Toronto. Definitely worth a listen.

I picked up a couple of souvenirs from the event: a T-shirt from Flying Monkeys, and a glass from Beau's and Ashton Brewing for my collection.

If you've never been to a beer fest, and you're not into lineups and crowds, go during the day. When we went Friday afternoon you could literally walk up to any of the brewery stands and and get what you wanted within seconds. On Saturday night, most of the stands had lineups anywhere from 10-20 people long. Granted, they moved fast so you didn't have to wait very long, but it's something to keep in mind.

Overall, a fun time, but a little expensive (spent $60 on tickets alone). 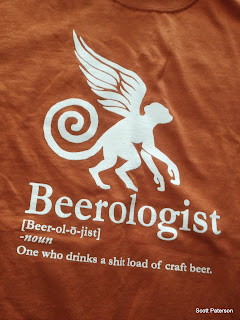