My second beer even of the week was hosted by Steam Whistle at The Brig on York Street in the ByWard Market. 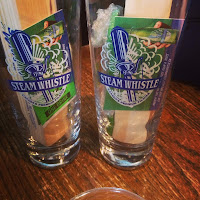 We arrived a little after the 5:30pm starting time. I was a little surprised to see that they weren't checking names or anything of those invited. I'm not saying that's a bad thing... who needs red tape when it comes to beer? :) We walked in, right to the back where there was a lineup of other Steam Whistle lovers. We were greeted by Marina (Community Relations for Steam Whistle) who then handed us each some Steam Whistle swag: a glass, two passes for a free brewery tour, a wooden "steam whistle", a bottle opener, and a beer ticket. What a great way to start an event! :) 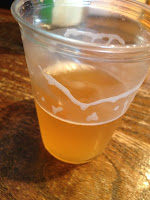 The unfiltered beer sampling was plentiful. A rep was walking around with a trayful of samples for much of the night so I got to try it a few times. I really enjoyed it.

My wife and I sat at a table near the front of The Brig. It was our first time at this pub, and we liked it. A little while after we sat, another couple asked if they could share the table with us. I'm bad with names, but I'm sure their names were Trent and Krista. We had a good chat with them about everything from beer, to photography, and kids. 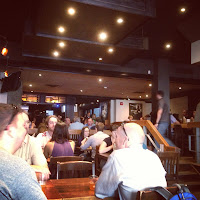 There was some free food available, and we did see it being served at other tables throughout The Brig, but they apparently ran out before any of it made its way to the front where we sat. The table next to us got some. Not a big deal, but it would have been nice to get some! We ended up ordering a combo platter of nachos and wings, which were delicious, along with another glass of Steam Whistle.

Overall, a great event and photos were being Instagrammed and Tweeted throughout the night with the #SteamWhistle hashtag.