My first beer event of the National Capital Beer Week was at The Bear 106.9FM's parking lot for The Bear's Breakfast Beer Bash.

It started at 4:00pm and we arrived around 4:30. After 'signing in', we received our 4 drink tickets (for 4oz samples of beer) and a food ticket.

I tried a few new brews and a couple of old favs. I don't recall the names of some of the beers I tried (yeh I suck... I should have taken notes or something). They were all really good, but the one that stood out was a "Honey and Ham" beer from Big Rig, brewed especially for The Bear. When she told me which Big Rig beers they had, I had to ask her to repeat the name because it caught me by surprise. 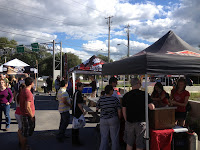 For entertainment, they had... what else? Beer pong. It was a little too windy, but all participants seemed to have fun, and bystanders chased down the ping pong balls to keep them going. There were plenty of prizes for winners... T-shirts and passes to the National Capital Beer Fest were what I saw given away. We won 2 passes for the National Capital Beer Fest. It was pretty easy to win when you play against your wife — you're guaranteed a prize with either of you winning. :) I was hoping for VIP tickets, but ended up with the same as what we already had that we'll give away to beer-loving friends.

Overall a pretty decent event! I shot those pics earlier, but it was much busier by the time we left.

Four beer sample tickets doesn't last very long, even when my wife gave me her's because she was driving. We left at around 5:30 or so and decided to go out for dinner at the Mill Street Brew Pub. Review to follow. :)

Tomorrow we hang out with some Steam Whistle reps!

Update: I think this was one of the beers we sampled: Kichesippi Wuchuk IPA. I could be wrong, but I remember mention of a UK IPA. I liked it. Not a very bitter IPA.