I haven't even had a full bottle of my pale ale home brew yet and I'm already planning the next batch.

The pale ale still has a week to go in the bottles, based on the manufacturer's instructions, but I'll be opening one tomorrow night to see what it's like so far. I've been fighting the urge to sample it for a few days now. :) 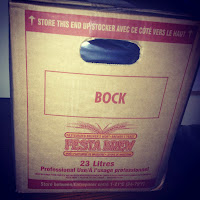 Yesterday I decided it would make sense to start a new batch while this one was aging. By the time it's ready for bottling, I'm fairly certain that I'll have more empties for it.

My son wanted me to pick up a wheat beer, but they didn't have any at DeFalco's. They had a blonde, west coast IPA, pale ale, oatmeal stout and a bock. The bock is on my to-do list, so I picked it up. I also bought another 24 PET bottles, some caps, and a tub of sanitizer.

I think we'll get it started this weekend.