My home brew has a name: Billy Rigg's Basement Brew

It's a bit of a joke with a friend at work who had a dyslexic moment and said "beely rig", instead of "really big". I said it sounded like some kind of beer brand... "Billy Rigg"... and then I added "basement brew". It stuck and that's my brand for my home brew. :)

I checked on its progress this past Thursday and the air lock seemed to be doing nothing.

I checked on it again today and it had moved, but really there wasn't much going on.

I decided to draw a sample today and check the gravity and taste. I enlisted my co-brewmaster son to help.

This is where things got a little confusing. From what we could tell, it seemed the gravity was higher than it had been when we racked the beer. It was reading somewhere around 1.018 to 1.020. But there seemed to be a bit more carbonation happening in the beer that was making the hydrometer float higher than it should be. We're figuring that it's 1.018. 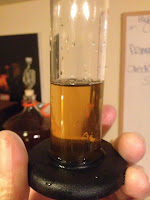 I was really happy and surprised with the clarity. It still tasted a little light, but it was good. I'm sure it'll be even better carbonated. :)

After taking the reading, we decided to get it bottled.

Priming the beer was simple enough. Sterilizing and rinsing all the bottles was very time consuming. I learned that the next time we do it, I'll probably use my old brew kit pail rather than a camping cooler. It'll be a whole lot easier, I think, with the deeper container. 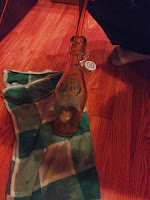 Bottling was a breeze. I happened to have a bottle filling rod from my last kit that we used. I'm not sure why my new kit didn't come with something like this. It has a spring-loaded tip to allow quick stop'n'go bottle filling. Much easier and less messy than a hose clamp. 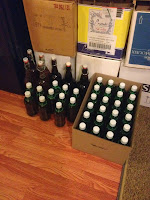 We first filled the 8 flip-top bottles that I acquired from a friend at work. We then started filling the 500ml PET bottles that I bought at DeFalco's. This was so much easier than 27 years ago when I used a bottle capper.

When all was done, we ended up with almost thirty-five 500ml PET bottles, five 750ml flip-top and two 1 litre flip-top.

Now we wait for 2 weeks before refrigeration.  We have one partially full PET bottle that I'll probably try in a week's time to see how it's going.

I'm already looking forward to our next batch. I can't decide if it'll be a red or a bock. I'm leaning toward bock.