Due to a nasty health issue that occurred last week, and is still somewhat ongoing, there were no new beers for me to discover this weekend. :(

I did, however, decide to crack open one of the pale ale home brews to see what it's like on the third week since bottling.

I'm not sure if it's better than week two, but it is still a very tasty beer and one that I will definitely brew again in the future.

Something I noticed about bottles is that it seems the 750ml glass swing-top bottles I used have more carbonation in them than the plastic 500ml bottles. The same goes for the 1L bottles. However, I also noticed that one plastic bottle may have a little less or more carbonation than another. Maybe some weren't closed as tight? There just doesn't seem to be as much foamy head as from the glass bottles.

I picked up two dozen 500ml swing-top bottles the other week so when I started using them for the Bock, I'll be able to do a side-by-side comparison with the 500ml plastic bottles. 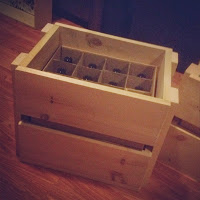 Speaking of the Bock. Bottling day was supposed to be Friday, but I decided to let it sit for an extra week before bottling. That's probably a good thing anyway since the health issue would have gotten in the way a little. Apparently this should help to bring out more flavour. Who knows... I don't really have anything to compare it to since this is the first Bock for me.

Yesterday I built two new beer crates, specifically for the the swing-top bottles. As an added bonus, the size will also suit wine bottles. They cost around $20 each to build. I need to find a cheaper source of wood for any future crates.