My two hops plants that I'm growing for the Beyond the Pale Community Grow Hop seem to be doing well. The one that I almost killed has fully recovered and is slowly catching up to its sister. :)

I decided to run twine, zig-zagging, up the front of my house and train the hops onto it. I used small screw in hooks, but I may change them to long nails since the hooks bring the twine too close to the house, and may not allow the hops to wind around it properly.

Here are two pics. It's crazy how fast they're growing. The one on the left of each photo is the one I nearly killed, if that's not obvious. :) 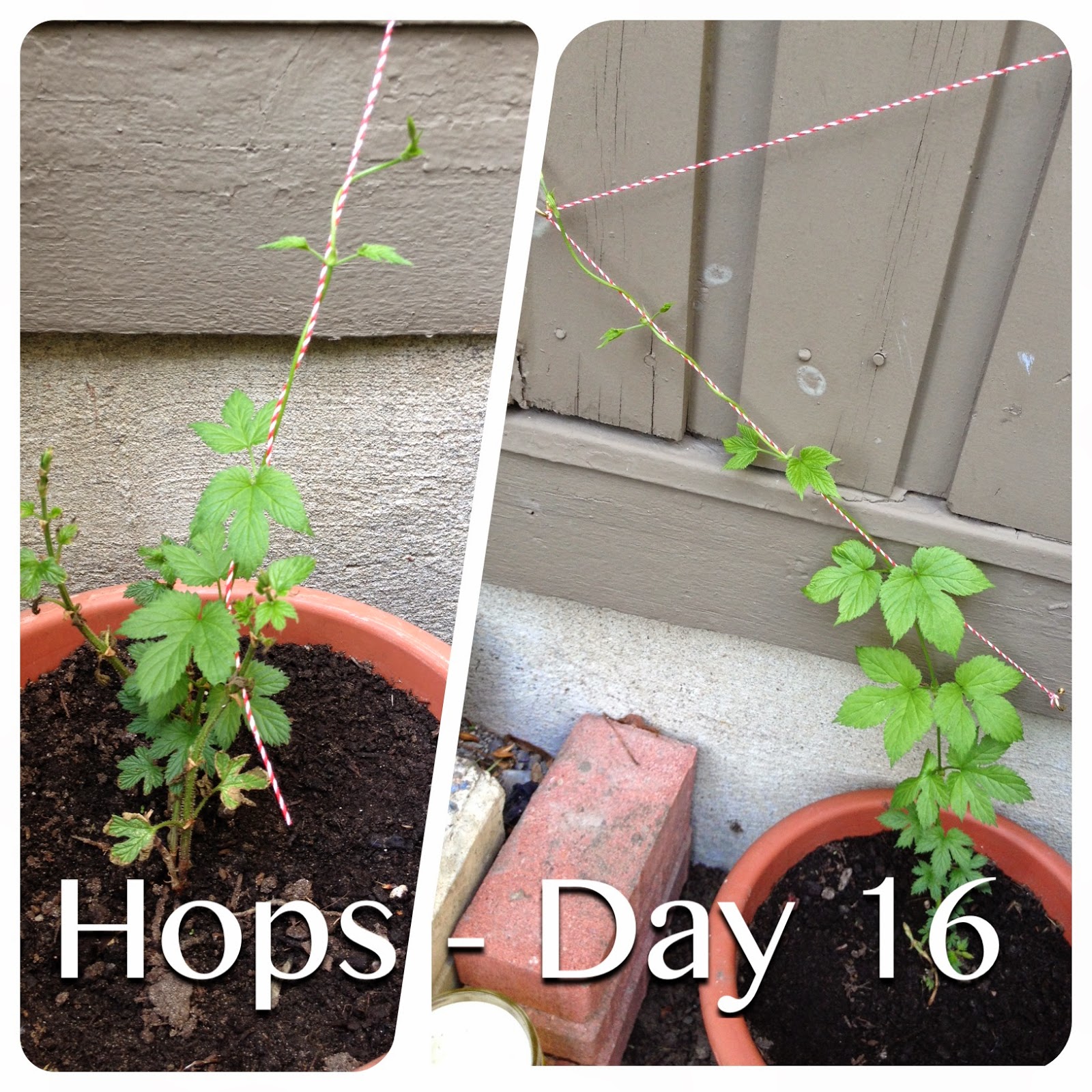 As I mentioned in the last post, I went to the Beyond the Pale Community Grow Hop on Saturday.

I arrived a little late because of some unexpected heavy traffic on the highway, so I missed the introduction chat. I bought two rhizomes and got an information sheet explaining how to plant and care for the hops and was on my way in no time.

I decided I would plant them at the front of my house. It gets the most sun, and I can run twine up the side of the house to allow the hops to grow. Apparently these grow 10-12ft in the first year, and 20+ after. :)

I was a little worried that they might die before I had a chance to plant them, so I planted one of them in the flower bed and decided to wait until I got better soil before planting the second. It was a big mistake. The first looked in bad shape the next day, while the second (even though it was still in the ziploc baggie) looked pretty healthy.

I picked up a bag of soil and manure and decided to plant the second in a large pot. I then dug up the first and replanted it in its own pot as well.

After one day, the second still looked very healthy. I could kick myself for being impatient with the first. However, after three days in the good soil and manure, I think the first is recovering. The leaves still look a little sick, but the plant is looking perkier overall.

Taking the next step

After stopping by Beyond the Pale's Community Grown Hop on Saturday, I dropped by DeFalco's to see if they had the Festa Brew Wheat in stock. If they didn't, I was going to pick up the West Coast IPA.

Sadly, they had neither in stock. Lots of Blond Lager, Brown Ale, and Cerveza were available, but I just recently made the brown ale, and the cerveza is awaiting bottling.

Right beside the Festa Brew skid, boxes of Brewer's Best caught my eye. And, they were on sale.

It's been my plan to try something new this spring — something that requires a little more work than pouring wort into a primary fermenter and pitching yeast. I picked up a Belgian IPA and a Witbier kit. As a bonus, I also used my accumulated DeFalco's Customer Points to knock an extra $40 off the price.

These kits are very complete, including bottle caps. All you need is the equipment.

The question now is when? :)

I once thought about trying to grown my own hops.

I found an online supplier of rhizomes, but on top of missing the deadline to order them, I found out that they grow really freakin' tall. I don't have a very big garden. So, on the backburner it went.

Then this came up, for Saturday May 10.

Beyond the Pale's Community Grow Hop!


Everyone who attends will be able to purchase rhizomes to take home and grow for the season. At harvest time, you can bring your hops to us at Beyond the Pale at which time we will use them to create a kick ass beer made with the hops grown in our neighbourhood. Rhizomes will be $5 (cash only) We will have our very own Hop Farms available on site to give you all the help/info you will need to be successful.

I'll give it a try and see how it goes. If they grow well, I'll probably keep a little for my own home brewing adventures. ;)